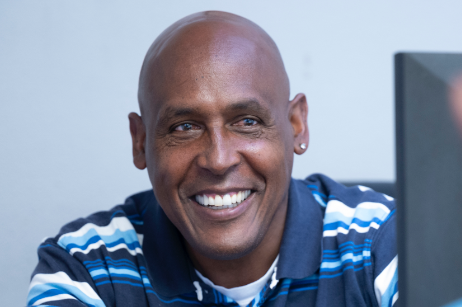 Going to prison is a rock-bottom moment for most people, a time for self-examination, a time to consider turning things around.

Not Garfield. He’s been to prison seven times, mostly on drug charges. Every time he got out, he immediately went back to his old ways. But in January 2020, facing another charge, a wise probation officer gave Garfield a choice: Back behind bars. Or into the Las Vegas Rescue Mission’s rehab program.

Garfield reluctantly chose the latter. “I still wanted to do things my way,” he says. “But I’m my own worst enemy. I had to learn how to get out of my own way and just allow other people to help me.”

Garfield got the help he needed at the Mission, but it wasn’t easy.

“It takes a lot of hard work, but it’s worth it,” he says. “The Mission treated me with dignity and respect. They gave me hope and they inspired me that I was worthy and I could do better. But you’ve got to want it.”

At 54 years old, he had at last reached a point where he wanted it. It’s no surprise that Garfield had little self-worth, considering his difficult childhood. His mother, a victim of domestic abuse, was a drug addict herself. She committed suicide when Garfield was 14.

“A lot of trauma,” Garfield says. “Those things had an effect on me.”

Garfield says he was “spiritually dead” when he arrived at the Mission, but now puts his trust — and his life — in God’s hands. His turnaround has been so dramatic that he’s now on Mission staff as an assistant case manager, helping other men and women start anew.

“I’m giving back,” says Garfield, who is also pursuing a psychology degree and his certification in counseling. “I think the main aim in life is to be of service and to love. After getting on my feet, I’m able to help others, and that’s the greatest gift right there.”

Thanks to you, people can find new life. We’re so grateful!

Thanks to you, people can find new life. We’re so grateful!