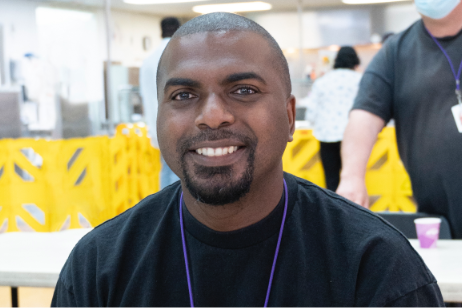 Antoine had everything. A wife he loved. Two kids he adored. A well-paying job. A nice neighborhood.

“A nice middle-class life,” he says. “I had it all.” And then it all fell apart. Antoine says infidelity in their marriage led to a divorce, which led to depression, which led to drinking.

“Alcohol had taken over my life,” says Antoine, who had never had a drink before his marriage fell apart in 2008. “First it was just one beer. Then two. Then it eventually turned to liquor.”

He drank to numb his emotional pain. And then, after back surgery, he drank even more to numb his physical pain. “Instead of getting help, I used alcohol for help,” Antoine says. “And it just went downhill from there.” He had been a driver for a local company, making $70,000 a year. He never drank on the job, but at the end of the workday, he hit the bottle hard, went to bed, then got up to do it all over again.

“I couldn’t wait to get home each day so I could start drinking,” Antoine says.

Eventually, it caught up with him. Not only had he lost his marriage, but he had damaged his relationships. “When alcohol consumes you, you can’t control it,” Antoine says. “You need professional help. I had to set aside my pride and seek help.”

When Antoine finally admitted that, a friend had a recommendation: the Las Vegas Rescue Mission. Antoine walked through our doors a broken man, but with a glimmer of hope that he could turn things around.

“I was ashamed,” he says. “And I was afraid of the unknown. I’d never been in a rehab program before.”

He says it took a couple months before he fully bought into the system, got honest with himself, and addressed the “why” behind his addiction. Through counseling, Antoine came to realize how much he had been hurt by growing up in a fatherless, and mostly motherless, home.

“I never met my father,” he says. “And that took a hold in my life that I never even realized. And my mother wasn’t always there. I was raised by my grandparents.” Antoine says he’s learned a lot about himself at the Mission, particularly that growing up fatherless was not his fault. “And I have to move on from it. Because if I keep it with me, I’ll pass it on to my children. But I’m here to break that cycle.”

Now approaching one year of sobriety, Antoine credits the Mission and God for turning things around.

“The Mission saved me,” he says. And now he’s giving back — as a case manager for another organization. “This is the kind of work I want to do,” he says. “I love helping people.”

You help people turn their lives around through your support. Thank you!